Teach Kids How to Be Prepared

The Hug-A-Tree and Survive program is designed to teach children ages 5-12 how to keep from getting lost, what to do if they become lost, how to stay warm and dry, and how they can help searchers to find them. The program originated in San Diego, California, following the tragic death of a nine-year-old boy who had become lost in the woods.

The Hug-a-Tree and Survive Program teaches children and their parents the following principles:

Hug a Tree With West Valley Search and Rescue

West Valley Search and Rescue regularly presents the Hug a Tree and Survive Program to local elementary schools, scouts, and other youth organizations. There is no cost to participate in the program, and all class participants receive a free emergency whistle and a program manual/coloring book. Each presentation concludes with an open question and answer session. 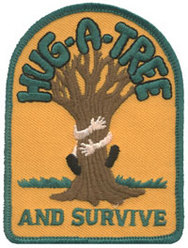 History of Hug A Tree and Survive Program

On a Saturday in February of 1981, three brothers were together on Palomar Mountain, 60 miles northeast of San Diego. They were walking on a popular nature trail a half-mile from the camp where their parents were preparing lunch. Two of the brothers believed that the nine-year-old was racing them back to camp, but Jimmy Beveridge never arrived. The family spent one hour searching on their own before contacting a Park Ranger who in turn contacted the Sheriffs Office.

By late afternoon, the local sheriff’s helicopter arrived, Sheriff’s Reserve Search & Rescue personnel were beginning to assemble and members of the San Diego Mountain Rescue Team arrived. The official search had begun and quickly escalated as operations continued into the night. As is often the case in February in Southern California, the weather was unpredictable. Saturday had dawned beautifully clear. It was warm in the sun and cool enough for a jacket in the shade. There were still patches of snow in the areas the sun didn’t reach. As nightfall approached, clouds and fog moved in and the temperature steadily dropped.

By Monday, it was raining almost continuously and fog continued to shroud the mountain top. The helicopters could fly only when the cloud ceiling retreated, which was rare on this day. The wind and rain had neutralized Jimmy’s scent, so tracking dogs were of no use. The only hope was to systematically search the entire area, and pray for a sign of the boy.

A Break in the Search

Tuesday morning the weather broke and the sun came out. There were about 400 searchers on the scene, including 200 marines. That afternoon the boy’s jacket and one shoe were recovered and his direction of travel was finally established. Wednesday morning Jimmy’s body was found, curled up next to a tree in a ravine about two miles from the campground. He had died from hypothermia.

The tragedy gnawed at Ab Taylor, a professional tracker for the U.S. Border Patrol, and Tom Jacobs, a free-lance photographer. Both had been members of the search teams that worked tirelessly to find Jimmy. It was the first time in Mr. Taylor’s thirty-one years as a tracker that he had failed to find a missing child alive, and the experience prompted him to enlist Tom Jacob’s collaboration in establishing Project Hug-a-Tree-a program aimed at teaching youngsters what to do if they’re lost.

The name of the program derives from its primary message: If you’re lost, stay put – hug a tree – until help arrives. “That’s extremely important,” Mr. Taylor emphasized in an interview for Woman’s Day magazine in August, 1982. “Many children panic when they get lost. They run for miles, get overheated and strip off clothing. Some even hide from searchers because they’re afraid of being punished when they get home.”

By the end of 1981, Ab Taylor and Tom Jacobs, with their own money and the help of Jacki Heet and Dorothy Taylor, developed and produced a fear-defusing, scripted talk and slide show and were teaching it at hundreds of schools across Southern California. The program taught a number of survival tips designed to save young lives. “‘Make yourself big,’ we tell them,” Mr. Taylor explains. “That means wave a T-shirt or an article of bright clothing when helicopters fly over, or make a big X of branches on the ground or scratch one in the dirt. Lying down flat will also make a youngster more visible from the air.” The program teaches that children camping or hiking in wooded areas should carry a whistle and a large, plastic trash-can liner with a small face hole cut out in front. “Kids are taught never to pull a plastic bag over their heads,” Ab Taylor says. “But a trash-can liner with a face hole affords great insulation and can prevent death from exposure if you’re lost in the wilderness at night.”

Following the article in Woman’s Day magazine in 1982, several thousand letters were received requesting further information and expansion of the program outside of California. Today, thousands of Hug-a-Tree and Survive programs have been taught across the United States, Canada, and in several other countries around the world.